On September 6th, Tristan had his last treatment at UCSF. On September 22nd, he took he last dose of oral chemo. On September 24th he turned six, and, last Saturday, on September 29th, we threw a party to celebrate his birthday, and the end of treatment, and the family and friends who have helped us over the last three and a half years.

For me, this party was the symbolic end to Tristan’s leukemia. For a few years, I have been envisioning the event; it’s been long in the planning. Throughout the two weeks leading up to the party, Gary, my mom, and I watched the weather. This is Kneeland’s best time of year – warm, sunny, lovely. This is when my tomatoes ripen. So we couldn’t believe it when the forecast read: Monday, sunny and clear; Tuesday, sunny and clear; Wednesday, sunny and clear, and so on, all the way up to Saturday the 29th, which read: thundershowers. WTF?! We get, like, two thundershowers a year on the mountain, and it’s simply too early for rain.

Party prep went ahead. Gary mowed and weed whacked, built another table out of sawhorses and plywood, and ordered kegs. I bought cases of wine and tons of food. Two days before the party, in 80 degree sunshine, we arranged the outdoor tables and furniture in the shade of the walnut trees. My mom and I made enough potato salad and black bean & rice salad to feed an army. We bought lots of reusable glasses and borrowed bins of cutlery. Chris smoked a pork shoulder down in San Francisco and drove it up. Phoebe and Tristan helped put up balloons and streamers. Tomas planned for soccer games in the paddock. 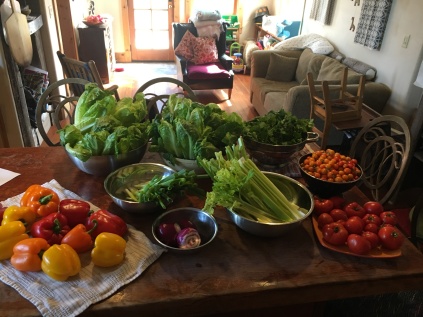 But on Friday afternoon, when the thunderbolt symbols lined up perfectly with the 3pm start of the Saturday party, Gary and I began to empty out one of our outbuildings; we’d need to move the party under roofs. With the help of a small wooden bar (complete with metal footrest and stained glass cabinet windows) abandoned in the building by the previous owners of our place, and more streamers by Tristan and Phoebe, the old building became a pub and foosball court. Gary somehow hauled our 500-pound wood-burning grill down into the woodshed, where our barbecue guru could grill away without being drenched.

Saturday morning was grey and gloomy, and by early afternoon, when the rain drizzled down, it was clear that the outdoor summer party would instead by a barn party and an indoor party. Also, as it often does when the weather is bad, our electricity began to brown out now and then. We mostly ignored the electricity fluxes (though I was frustrated that a single load of laundry was taking four, six, ten hours to run). While Gary took Tristan and Phoebe to their soccer games, I set up the dining room and kitchen to serve food, dragged the outdoor furniture into the outbuilding, and laid out the wine and sodas and glasses on an old workbench. Chris and my mom did final salad assembly. My friend Ian, the barbecue chef, arrived and was installed in the woodshed, where he fired up our grill, in addition to a rented one and a borrowed one. I set up our fabulous guitarist, a gift of my wonderful friend Jackie, not on the wet porch but instead in the kitchen.

But it didn’t matter! Guests began to arrive at 3, and by 4:30 there were gobs of people here. And, I had forgotten – this is Kneeland! Nobody gives a shit about the rain! Grownups holding a beer or glass of wine stood around in the drizzle in front of the outbuilding, totally unconcerned with the wet. Teenagers clutching San Pellegrinos slouched around, teenager-style, in the drizzle by the paddock, totally indifferent to the rain. Little kids swung and ziplined in the drizzle, not giving a hoot about the rain. Some folks sat inside and listened to the guitarist – some even danced – and others crowded around the kegs in the outbuilding. Kids played dress-ups upstairs in Tristan and Phoebe’s room. People munched on plates of appetizers. Meanwhile, Ian, surrounded by three grills, sweated in the outbuilding. Near 5, he began to send trays of spare ribs and jerked chicken wings and hamburgers and hotdogs up to the house, and we moved onto dinner. 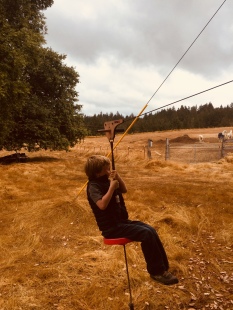 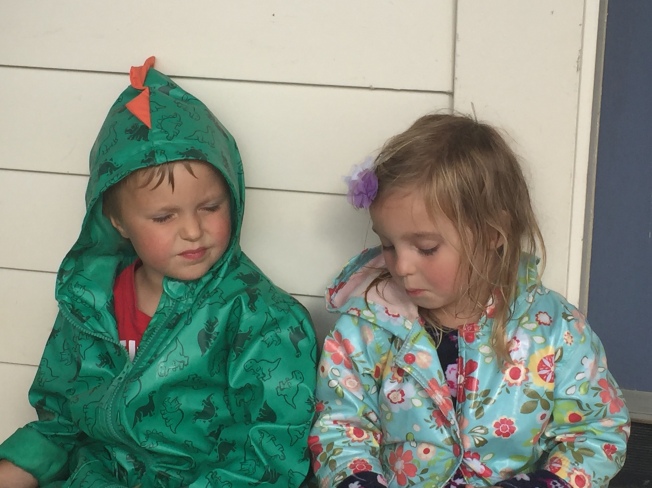 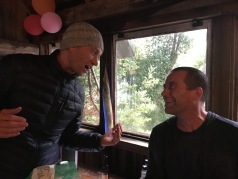 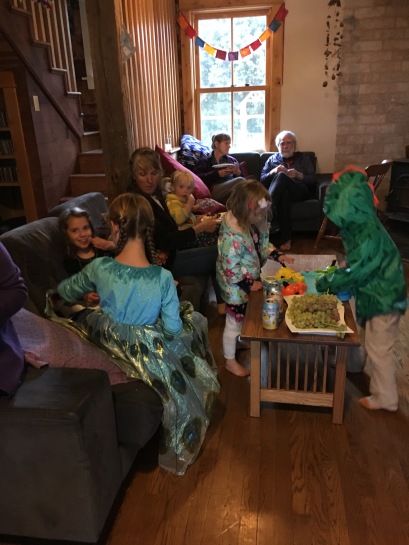 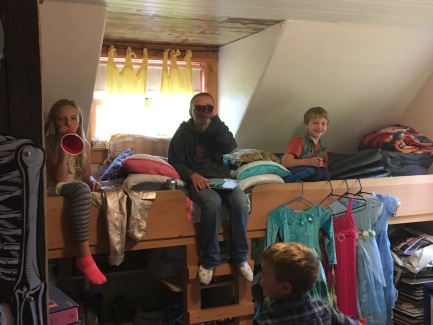 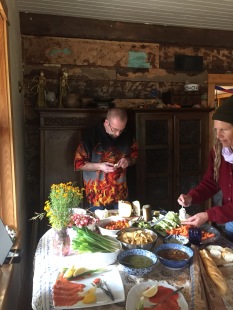 Some of us waited impatiently for a margarita, which is was slow in coming – we had rented a slushie machine that, we hoped, was producing home-made margaritas of fresh lemons and limes, but the electricity brown-outs were seriously impeding their emergence. In the early evening, when the electricity cut out totally for the first time, Uncle Chris wisely unplugged the slushie machine and pored the contents over ice in salted pint glasses. They were perfect, perhaps made even better by the hours of on-and-off not-quite-freezing gyration!

With the big crowd, and the good moods, and the margaritas, and Chris’ terrific smoked pork, and Ian’s awesome BBQ, and the drizzling rain, and the electricity back on again, things were feeling pretty good. But then, just as dark fell and I was cutting the birthday cake, the power went out…for good…and it was epic! With my knife poised over the chocolate cream cheese icing, and the darkness suddenly descended over us, there was a moment of silence. And then we all let out a huge whoop! This is Kneeland, after all, and we can party in the dark just as well as we can party in the light. The candles came out, the cell phone lights came on, and I served the cake to the crowds of kids eagerly bunched around me, and then to the crowds of adults eagerly bunched around me. In epic Kneeland style, the party went on, and a gaggle of kids played foosball by cell light for at least another hour or two, while grownups in the outbuilding and kitchen continued to eat and drink. A lost friend, an oncology nurse who took care of Tristan and me during our very early days in the hospital, whose GPS sent her to Kneeland “the back way”, arrived after a 12-hour trip on dirt roads that should have been a six-hour trip on pavement, and we quickly administered a few glasses of medicinal Zinfandel. She was the last of 102 guests to show up. 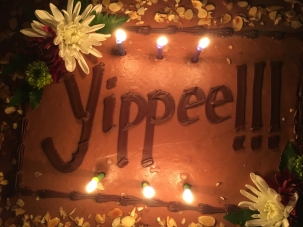 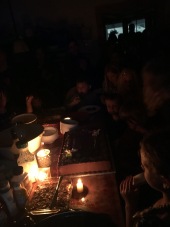 At some point soon after the outage, there was a bit of excitement when a few people excited told me that sparks had flown out of our PG&E transformer. The PG&E truck showed up while Gary was trying to call them – that was fast, we thought! A cable, rubbing on a tree in the wind, had worn through, producing the brown-outs and therein explaining why we had never achieved slushie margaritas, and had eventually snapped completely. This also explained why it had to rain on this day, at a time of year when it doesn’t rain – it rained so that Kneeland wouldn’t go up in flames when our electrical cable broke clean through! As the party wound down in the kitchen and the outbuilding, the PG&E guy fixed the cable and brought light back into the house, just moments before our cell phones were almost dead.

Now, almost a week after the party, I am still happy and still exhausted. I’m happy for the wonderful friends and family and neighbors we have – people who have fed us and taken care of our animals and driven our kids around and who can party in the rain and pitch black. I’m exhausted because, for me, this was the end of a long and scary-but-also-incredible adventure, and because, well, I’m tired. But that’s okay. I’m happy tired, and I am planning to nap a lot in the near future. To those of you who were here, or who couldn’t be here but were thinking of us on Saturday, thank you loving us and taking care of us and celebrating with us in person or in spirit. 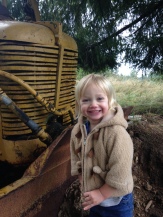 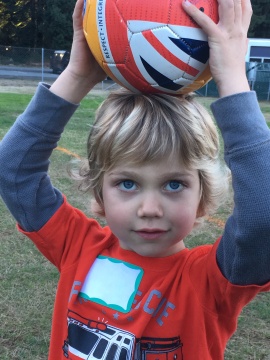