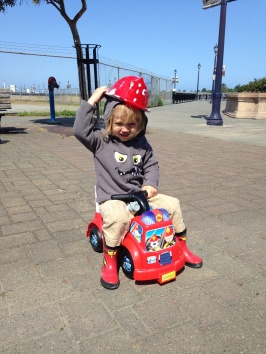 My two year-old son and I share a strong affection and appreciation for firemen, albeit from very different angles. Tristan is into the whole scene — the big red trucks, the sirens, the hoses and ladders, and the superheros who get to drive the trucks and “shoot the water.” I, on the other hand, am, uh, intellectually stimulated by a phenomenon in which an entire workforce population appears to be polite, soft-spoken, clean-cut, and incredibly good-looking. HOT men without swagger.

My fondness of firemen isn’t a long-standing one. No, it’s a recent one that grew with my son’s discovery of ride-on firetrucks and YouTube firetruck songs, and with my trips to Safeway for groceries. Huh? Yep. It’s strange, but one out of two times I shop in our small California city, a firetruck is parked in the NO PARKING FIRE ZONE and firemen are shopping inside. They seem to shop a lot. Are they culinary geniuses, in addition to being handsome and curteous? Shoot, that would make them absolutely irresistible.

Anyway, in our frequent encounters with uniformed firemen in the vegetable section, at the deli counter, and in front of the steaks, Tristan was repeatedly invited to visit a local firehouse. At first I thought the guys were just being nice. Visit men in their workplace? I don’t remember ever doing that when I was a kid; my father’s workplace was sacred and kid-free, as I recall. But, after a few such invitations, I got over it.

On a sunny afternoon, Tristan and I parked around the corner from one of our city firehouses. I stared at the Safe Surrender sign showing that the firehouse was a safe place to leave your baby if you were about to embark on a drug binge or a murderous rage and wondered if the firemen would think I was there to leave Tristan. I tried to put on a sane, stable face. It’s not easy after five years of no sleep.

I knocked on the firehouse door and asked the (very handsome) fireman who opened it if we could come in to see the firetrucks. Thereafter followed a most pleasant experience: for a full half hour or so, Tristan and I were fully attended to by three young, muscular, friendly, swagger-free men. They put Tristan in the firetruck, let him shoot a firehose, gave him a plastic fireman hat, and paid us their undivided attention. I don’t think I’ve ever had the undivided attention of THREE hot men at the same time. Or maybe not even one. 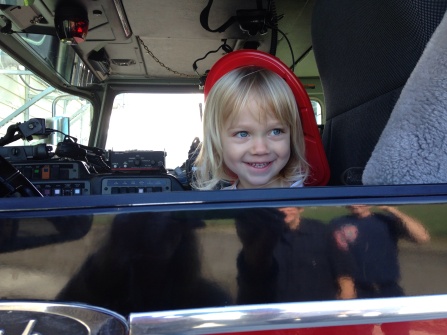 Then I got the genius idea that the local firehouses offer childcare. I suggested the guys float the idea at their next fire department meeting. Can you imagine? The moms would be in heaven, the kids would be out of their minds with joy, and, given how frequently the firemen shop, they would always be well-stocked with the essential diapers, wipes, and Cheddar Bunnies.

I was stuck with another brilliant thought: Tristan and I could do this weekly, even twice a week! Our city has at least nine firehouses. We could just cycle through! Tristan would get his fill of firetrucks and I’d bathe in the lavish attention of curteous firehouse studs. Could there be any more effective medicine for maternal exhaustion and sleep deprivation malaise? When we exhausted our local firehouses, we could range more broadly, throughout the county! There were months of entertainment for Tristan in store, and, in contrast to the less enticing option of playing hide-and-seek or going to the park again, I’d be just as dedicated to the mission as my son.

Alas, just as I was ready to implement my plan, Tristan is now onto other things. Every morning he puts on a plastic police helmet and a Captain Hook hook and says he’s a police pirate. The shiny red firetrucks and the firemen no longer have the same allure for him. Crap. I momentarily imagined embarking on a tour of local police stations, but images of twitching meth heads sitting on benches while they waited to be booked, and gigantic men raging behind bars, and uniformed men with swagger quickly crowded out any images of inviting policemen I could conjure up. And we don’t have any local pirates, so it’s back to the same old, same old.