When we moved back to the US from Indonesia a few years ago, still a family of four, it was not pain-free. After seven years in West Java, we almost burned up on re-entry.

Gary and I had previously spent long periods — six or eight months at a time — in Indonesia during grad school, doing our field research, but those stints abroad didn’t make us feel like foreigners when we returned to campus with our canvas sacks full of Rite-in-the-rain notebooks, silica gel, and rolls of slide film. On the contrary, we were perfectly in our element. Most of our fellow students were coming and going, to Nicaragua, Costa Rica, Brazil, Thailand. It was all par for the course when Dan came back with leishmaniasis, Ben brought home a botfly larva that he gently nursed with maternal affection until it pupated from the back of his hand, Danny reappeared with a horrifying scar on her arm from a Zodiac propellor, and Chris returned from French Guiana with a thick accent Français. We all re-entered safely, with our new parasites, accents, battle scars, and so forth. But not so upon our return from seven years in Indonesia post-grad.

It wasn’t simply the length of time we spent abroad. No, it was that it was a critical period of our development, the period where we became working parents with kids. We left the US freshly-PhD’d thirty-somethings just beginning our careers. Crazy, isn’t it, to be that age and just getting started? We were practically…neotenic. As in, adult salamanders that are capable of making babies but that still retain baby features of their own, like larval gills. Nevermind. Anyway, we had earned a meager living throughout grad school by teaching, but, now, heading to Indonesia, we were embarking on our first REAL JOBS.

While we were living in Indonesia, we matured into working adults, first without kids, then with one, then two. But this developmental stage of our lives happened in a totally different…habitat, really, from that of other Americans getting started on their careers and families on home turf. In Bogor, dinner had been entirely in the hands of the fabulous Ibu Mimin and Ibu Tini, who also patiently taught us how to care for baby Tomas, ironed our clothes, bribed the garbage men with fresh sweet coffee to take our trash from the open concrete bin, flagged down the Aqua truck to get clean drinking water, and had generally been our family’s wise keepers. (I miss them so!) On our return, Gary and I were in need of a remedial course in keeping a house while working and being parents. I had to learn to cook. It was rough. 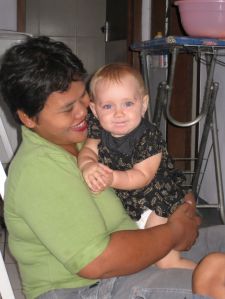 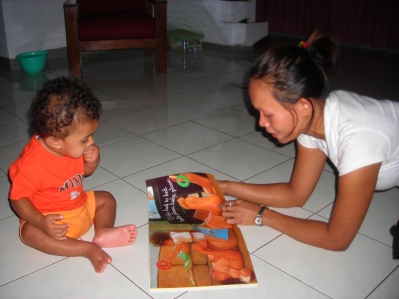 We struggled to get medical insurance, which we previously had in an international plan that gave global coverage, but for the US and Japan. The new insurers wanted proof that my noggin was still screwed to my shoulders, after they learned that, years before, I had sustained a head injury when our car was t-boned by a gigantic bus in a busy Jakarta intersection. We got the insurance, barely, after paying the doctor who treated me in Singapore a $500 fee for photocopying and mailing my records.

Once we had insured access to the US medical system, we struggled to make it work for us. After a few months home, Phoebe got amoebic dysentery on our first family trip back to Bogor. Home again in the US, two doctors would not believe my (expert, if I may say so) diagnosis. One waxed on to me about his credentials earned in a tropical medicine course. Congratulations, Doc, have a cookie, I thought. In Indonesia, we had learned basic diagnosis and self-medicated for years. I could walk into any pharmacy, ask for the medications I needed, and be done with it. You’d be nuts (and soon regret it) to rely wholesale on the Indonesian medical system, and we were often far away from help. Back in California again, it took me weeks to get a prescription for Flagyl, during which time the amoebas whittled down Phoebe from a plump baby to a gaunt one. We avoided admission to the hospital only because she nursed. In the end, the doctors handed over the meds when they realized they had never run the necessary test and had, in error, reported to me a negative result. Here’s the Flagyl, please don’t sue us.

There were funny things, too. We were mal-adapted, confused immigrants, fresh off the boat. On my first trip to the supermarket, I didn’t know what a debit card was or how to slide my credit card in the reader. Those things came into popular existence while we were gone. And Tomas (sweet Tomas!) took his shoes off whenever he went into a house or his pre-school. He’d stop just inside the door, crouch to pull of his sneakers, and then line them up neatly just inside the door. Even Lucy, the street dog we brought home with us, was a misfit; the dogs in our new neighborhood repeatedly launched snarling attacks on her. Also, I had to learn to watch my mouth. The expatriates in Indonesia swore like sailors, and, after we moved back,  it took a few dozen instances of shocked silence before I figured out I probably shouldn’t curse so much in casual conversation with other parents, check-out clerks, and the gas station attendant; turns out dropping the F bomb doesn’t just figure into daily conversation around here, and, unlike my kids, who’ve heard it all, there are lots of children who are hopelessly unable to resist firing off cusses once they’ve heard them. Before we moved back, I had absolutely no idea that many folks would prefer one didn’t use the un-abbreviated G-word in an exclamation of excited surprise, but that  “OMG!” is an acceptable interjection in a similar instance.

Gary, who grew up here in town, struggled to avoid feeling like he never left home. He had departed for college at a sprint, eager to get as far away as possible, as fast as possible. The little yellow house we rented after returning to the US was just down the street from his old high school. He pointed out the window of his guidance counselor, a polished jerk who had advised him not to apply to Harvard. “A waste of money. Think of your parents,” the man had said of the application fee. “You’ll never get in there.” Gary did get in, and did go to Harvard, and then went on to complete his doctorate…but it stung him to be back again and just down the street from that ass, sort of like he hadn’t actually made a getaway.

It’s good to be home again. It has taken a while to regain our land legs, or to readjust, but really we’re only a bit singed after re-entry. Now we are four years past our return, and I think we’re more or less ready for our citizenship test. We’re up on our fabulous mountaintop, far from Gary’s high school and the enthusiasm-squashing guidance counselor. (Who put that man in that office?!) These days I can make a mean steak au poivre, roast a chicken to perfection, and have successfully recreated Ibu Mimin’s coconut lemongrass soup (though, admittedly, not to her level of awesomeness). Tomas can manage to enter a door without taking his shoes off. I can slide my credit card like the best of ‘em. I can (mostly) stifle my curses, and I do truly appreciate that it’s nicer not to sound like a swaggering sailor. Phoebe never did get plump again. In fact, she never started to eat again. We keep her alive with peanutbutter and fried tempeh. (Hmmm, maybe I should think about litigation…) And finally, we still avoid the medical system as much as possible, a strategy to which we are doubly committed since whisking a very feverish Tristan off the ER last year, where Motrin, Ibuprofin, and four minutes with the doctor cost two grand. I can handle those meds on my own, Doc.

Someday we’ll take our kids back to Indonesia to live there for a while. Tomas is, after all, of Indonesian background, and Indonesia is definitely a part of Gary and a part of me. We want our kids to have that, too. When we go, we might experience some re-entry friction there. Maybe the prices on the angkots (the little green minibuses) have risen, so we’ll be short and have to bum 500 Rupiah off one of the buskers sure to be hanging like a barnacle from the rattling bus. Or maybe the city changed the routes so we’ll end up in Ciawi instead Cilandak or Cicerup instead of Cimangis and have to negotiate ojeks (motorcycle taxis) to get us back where we want to be. Or, worst of all, perhaps all of Jakarta’s Duty Free shops have closed down and, without a handy black market contact, we’ll end up paying the equivalent of $20 a bottle for Yellow Tail. But we won’t burn up on re-entry, there, or here. 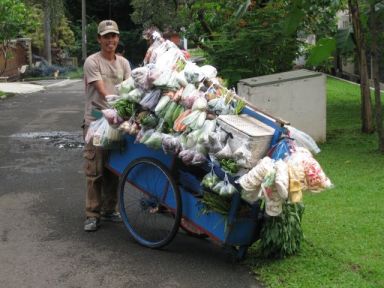