Tristan and I just arrived back in San Francisco, and, after the usual parking fiasco, are now installed again at Family House.

We had a fabulous almost-two weeks at home. A highlight for both Tristan and me was meeting the bus after school at the top of our drive. Each time we did it, when the bus pulled up, all the kids threw down their windows and waved and waved at Tristan, grinning and shouting out his name. The bus driver generously allowed a few extra moments each time, and Tristan was overjoyed, laughing and excitedly waving his hands back at the students.

A second highlight, for me, was attending Back to School Night. Oma babysat the kids while I went up on my own. It was great to reconnect with friends and I got to hold Kneeland’s newest baby throughout the event. Baby Taco, so nicknamed by the iPhone Auto Correct Fairy Godmother, is warm and snuggly and smells unmistakably of patchouli. His mama says she did not perfume him, so I’m thinking he was born that way. Either way, he’s delicious and bouncing him on my lap was a great way to listen to the teachers’ introductions. After the short speeches, I had brief chats with both Phoebe’s teacher and Tomas’. They went more or less like this: “You know where to find me, I know where to find you. Let’s chat if we need to.” Ah, one of the fine advantages of a tiny school. It’s not even possible to have trouble connecting with the kids’ teachers.

During our stay at home, Gary worked hard to finish a summer-long project to hotwire our horse pasture. It is a fact well-recognized by horse owners that horses defy all that we understand about natural selection. As an evolutionary biologist, I’m stunned that no young student has undertaken a study of the following inexplicable truth: all horses are out to kill themselves via the most expensive damages and injuries possible. Our two horses are no exception, and the hotwire project is intended to help them to NOT kill themselves. In the final phase of the project’s completion, Old Grey alias Buddy did his best to impale himself on a t-post. He wasn’t a looker before, and his efforts haven’t helped. So, now, as the rigged-up solar box charges, we’ve forked over a few hundred more bucks to the vet and Buddy has a big divot of dried flesh hanging off his nose, a scabby slash across his throat, and few stitches in his chest. He’s sort of an…an equine Frankenstein. How has this species not been pruned from the evolutionary tree? One of life’s mysteries.

Phoebe caught a bad stomach bug while we were home. Fortunately, the rest of us were spared. Our middle kid proved, once again, what an amazingly tough little thing she is. She asked for a big bowl Friday afternoon, threw up, and didn’t stop until 2am. Never missed the bowl.

Tristan would have appeared to anyone seeing him during these two weeks to be a perfectly healthy, strong, funny little guy. He LOVES playing with his siblings, and both Phoebe and Tomas have been so great with him. He had a great time, roughnecking with his big brother, practicing archery with Phoebe, hanging out with Oma, and mucking around in the garden. 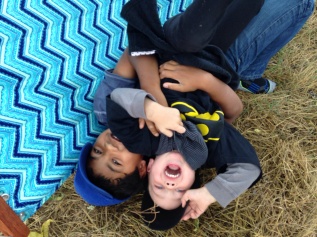 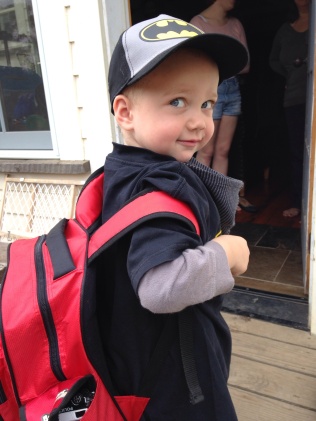 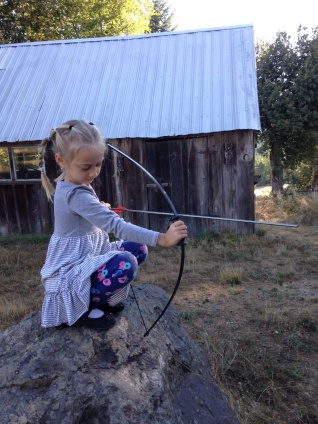 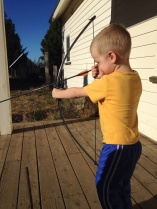 During the stay at home, I took Tristan on both Fridays to have his blood work done at St. Joe’s. His hemoglobin and platelets haven’t dropped, while his white blood cells and neutrophils are declining. But, as our UCSF outpatient nurse has said, they’re supposed to. The chemo is supposed to wipe out his cells, we just don’t want them all wiped out at once, and we want the numbers to stay high enough to be safe. And they are staying high enough to be safe — they are not scary low, as they were at the end of July.

On Tuesday Tristan will begin another phase of his treatment called Interim Maintenance. During this phase, he’ll be given IV chemo every ten days. There are no new drugs involved — he’ll be getting methotrexate and vinchristine. Also on Tuesday, Tristan will have an echocardiogram and EKG. This is in anticipation of the subsequent phase of treatment, called Delayed Intensification. During that phase, he’ll be given a drug called doxorubicin. Doxorubicin is scary. I lose sleep over doxorubicin. It causes weakening of heart muscle in some patients. As I understand it, this EKG will be used to both make sure his heart is strong and to set a baseline — he’ll be given a similar EKG every five years from now until…dunno…to make sure there is no weakening. I’m have a lot of unpleasant, nervous anticipation about Delayed Intensification. Ug.

Tristan has fallen in love. Stunningly beautiful Bianca is 17, Latina, and lives at Family House with her parents and older brother, who’s at SF State studying Criminal Justice. Bianca got a new(ish) pair of lungs a little over a month ago. She has needed them since she was 11, but resisted because she was too sad that someone else would have to die for her to receive them. Eventually she didn’t have a choice, that is, if she wanted to live. Last night, at the communal dinner table, she told me the whole story of the waiting list, the miraculously short wait, the seven-hour double lung transplant, the week-long general anesthesia, and the pain of waking up. She’s bright, and she’s articulate, and for the first time in years she’s now walking on her own feet instead of being pushed in a wheelchair. Tonight, again at the communal dinner table, Tristan confessed his love to her. And then called her a poo poo head. One reason he loves her is that she laughs delightedly at his poo poo jokes, which all go something like this: Knock knock. Who’s there? Cow. Cow who? Cow poo! Ha ha ha! Bianca and her family live in San Francisco’s Mission District, but…bad timing… several units in her apartment building began renovations just after her surgery, and the dust is too dangerous for her to live at home, so the family is at Family House instead.

So, two Small World stories from today. CRAZY small world stories. Tristan and I spent the day at the hospital. In the morning, he had an echocardiogram. In the afternoon, he had a visit to the pediatric oncology clinic. In between, we had lunch at the hospital cafeteria, which is quite decent. After he selected his lunch of yogurt and strawberries, and while I was contemplating the salad bar, I ran into my friend Esme, who I haven’t seen in some time. Neither of us had an idea that the other was there. Turns out Esme is in her final year of med school at UCSF and is doing a rotation in anesthesiology. Turns out Tristan has leukemia and is doing time at UCSF for treatment. It was a bizarre, emotional salad bar encounter that culminated in a great lunch together. I first met Esme about nine years ago when she came to Indonesia to help with the launch of a joint healthcare-conservation project I was working on in southwestern Borneo…and today we ate salad together in Mission Bay.

And the second Small World story goes like this: a few weeks ago, Tristan and I met a firefighter lady at…you guessed it!…Safeway. It was the day we were released from the hospital after Tristan had his port placement surgery. We were at the Safeway on Ocean Beach. With great excitement, we chatted with the firelady, who noted Tristan’s mask and the hospital wristband I had forgotten to remove. She asked if he was doing okay, and I explained his circumstances. She was so friendly, and so matter-of-fact, and she told us of her nephew in Mill Valley who had similarly been diagnosed with ALL when he was two, and who was at least a year into his treatment. Well, today, when we were in the clinic, and when Tristan, who no longer has private luxury suite status now that he’s beat his rhinovirus, was installed in his chemo cubicle, another woman and her young son came in and were seated in the cubicle opposite us. The mom and I got to chatting. At some point along I had asked the mother where they lived. Mill Valley, she said. It wasn’t far along in the conversation before Tristan’s firetruck obsession came to light, and the mother mentioned that her sister was a firefighter. Where? I asked. Here, in San Francisco, she said. Oh my god! I exclaimed, forgetting that I should instead say Oh Em Gee. She seemed okay at the slip up and I was relieved. Is she stationed on Judah Street? I asked. Etc etc etc. Turns out that today Tristan and I met the very nephew of the firefighter lady at Safeway a few weeks ago. The mother and I talked a lot, exchanged number and email addresses, and would both be very happy if our sons could be friends with other boys facing similar challenges. It was such a positive, fortunate experience. How on earth did we run into each other!!??

And now for the grit of today’s hospital experiences:

Tristan went completely apeshit over his echocardiogram. Bonkers. Nutso. This evening, during our going-to-sleep-chat, he explained that is was all about the gel, the sticky, gooey, ultrasound gel. Whatever. He had a massive tantrum. It was so massive that the nurse tech who was looking at his heart, pulsing and accelerating and completely freaking out while Tristan freaked out, wanted to pull the plug on the whole thing. She was worried about upsetting him any more. I tried everything. Cajoling, cuddling, yelling. Nothing worked. But no way was I going to have to do this over at a later time. I got really mad at the nurse, too, and told her that I didn’t understand why they hadn’t simply done this one of the three times (THREE!!) that Tristan has been under general anesthesia in the last few weeks. Finally I sorted things out by contorting my body into a totally unnatural position so I could nurse Tristan while the RN did the ultrasound. (Yes, Tristan is still nursing. We were so close to being done when this all started, but, honestly, it’s saved the day so many times in the last two months. It could be ages. I don’t care. Much.) Anyway, the echo got done and I apologized umpteen times to the nurse for getting mad.

Then, after lunch, when we went to the clinic for chemo, Tristan was an angel. He helped Nurse Evan to do all his vital signs, plugging this into that and taking various disposable things out of their packages, and he had the lowest blood pressure reading he’s ever had. He sat in the lap of his favorite clinic medical assistant, Karina, and told her he loved her. He didn’t wince when he had his port “accessed”, in other words, had a big needle poked into it. He was charming, and sweet, and had everyone gushing all over him. Grrrrrrrrr….after totally driving me to lose it in the Cardiac clinic earlier! The nurses gave him a birthday present — a big yellow truck — and he was in heaven. What a knucklehead.

During these few days in the city, Tristan and I took daily walks in Golden Gate Park, including to the serene and beautiful botanical gardens. Unfortunately, the gardens could have been more serene, had Tristan not decided exactly when we are there that he was ravenously hungry, and had I not forgotten the Bummy Gummies. On one of our walks, Tristan slayed bad dragons, rescued a princess, and flew on the backs of good dragons that were actually boulders. What a fabulous place, that park is. 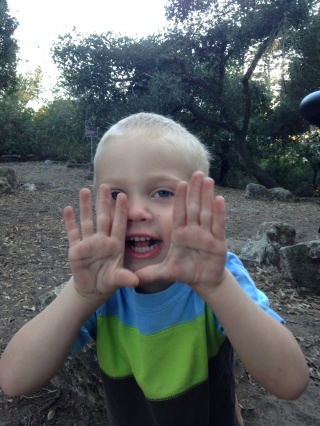 Tomorrow, back to Kneeland for a week. On Thursday, Tristan will turn three!