I’m pretty sure I’m developing a reputation as a crazy Fireman-stalker-mom. I swear, it’s not true. It’s just that almost everywhere Tristan and I go, even in the most unlikely places, we run into firefighters and see firetrucks. Last week, while we were home, the Prius announced via its terribly distracting display screen that it was time for an oil change. Friday morning Tristan and I dropped the car at the oil change place, which bears the unfortunate name of The Lube Rack. I thought it was a seedy strip joint before I started getting oil changes there. I unloaded the jogging stroller from the back of the car, crammed the diaper bag and my purse into the insufficient baggage space in the bottom of the stroller, put a carton of eggs in the net snack carrier part, and jogged off with Tristan with a plan to run a loop near the waterfront and over to my parent’s apartment, where I would deliver the eggs to my mom. Admittedly, the stroller was carrying a whole lot of crap one wouldn’t normally take on a jog.

We ran along a path at the waterfront overlooking Eureka’s marina and Humboldt Bay. The bay is beautiful, but the area adjacent to it is sort of a wasteland of stubbly, weedy grass. It’s frequented by Humboldt’s finest “travellers”, the sensitive, PC term, I have learned, for homeless, and seems to be a popular place to poop your pitbull.

Suddenly Tristan spotted up ahead not one, but TWO firetrucks, and a whole lot of firemen. “Look, look, Mom!! Firetrucks! Can we go?? Can we go??” So we jogged up as far as the path went, rounded the turn as the end of the wasteland, and were upon the firetrucks. As it happened, there was Ben, the friendly fireman who, just ten days before, had shown us around Eureka’s Firestation #1. He looked incredulous. “So, like, you were just walking by?” He eyeballed the egg carton. Who the heck runs with eggs? And then I found myself rambling…no, no…Lube Rack…oil change…taking eggs to my mom…Totally unconvincing.

They definitely think I’m a nutter. Toni, infamous in Eureka for showing up whenever and wherever there’s a firetruck.

Tristan was absolutely enthralled. The firemen extended the ladder way up high and did a training exercise involving shooting water out over the bay and climbing up and down the ladder.

Now we’re in the OR. Tristan is still asleep after another lumbar puncture. And, of course, when we arrived at the hospital today, three firetrucks and a whole bunch of red fire department SUVs were parked in front, and a big squad of firemen were trooping into the hospital for an emergency exercise. Thankfully I’m not yet infamous among the SF firefighters, and we were able to anonymously admire the trucks before heading to the OR. 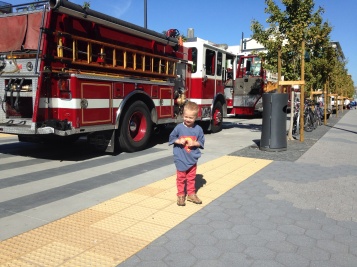 Yesterday morning we had Tristan’s blood counts checked at St. Joe’s in Eureka. Then we waited to see if the numbers were good enough for Tristan to have chemo today. Around noon our outpatient nurse called to say we were good to go — Tristan’s neutrophils are at 1500 and his other numbers good as well. We drove to Ukiah, again spent the night with our friends Peter and Laurel, and left at 8am without eating. Again, 1pm OR time, no food or drink since last night. Tristan was a trooper, fussing briefly only a couple of times about being hungry. The first fuss happened as we were driving into the city. We were and hour and a half earlier than ideal (no major traffic slow-downs past Santa Rosa and Petaluma), and I racked my brain for what to do that could distract Tristan from his rumbling tummy. So we went to TJMaxx and spent money. Tristan got ANOTHER fireman costume, and he helped mommy pick out a couple of sweaters. Seriously, he is a GREAT shopper.

Post retail therapy, we were off to the hospital. After we were called into the OR from the waiting room, we found a pink plastic pushcar in the OR, and I pushed Tristan round and round the floor while we waited. The car played music, which we danced to. We read his favorite Emergency Vehicles book. When he wakes up, I’ll feed him the pirate booty and cookie he picked out earlier, and then we’ll go over to the clinic for his other chemo. Then, to Family House for the night. Long day.

Tristan is pretty low energy these days, and is on the skinny side, probably as a result of the increasing doses of chemo. But he’s in a good mood, and sweet, and is happy to be home playing with Tomas and Phoebe and visiting Oma in the mornings. 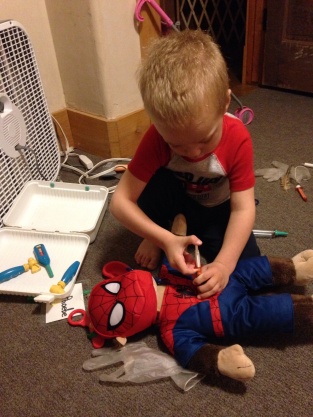 Our last visit to San Francisco, which included an OR appointment for spinal chemo and then a clinic appointment for IV chemo, went smoothly but for a large hiccup at the clinic when Mommy, tired and hungry, went bonkers over a stupid glitch and yelled at the most undeserving person around. The OR nurse had forgotten to log the IV fluids given to Tristan while he was under anesthesia. The fluids are given to protect his kidneys from the IV chemo given in the clinic. They take an hour to give, and the point of giving them in the OR was to spare us that hour later, as we went to the clinic straight from the OR. In the end it took an hour in the clinic just to sort out with the OR that, yes, the fluids had been given. But that didn’t happen before I completely lost my shit and shouted at the world’s sweetest medical assistant that, thanks very much for making this harder than it already is, and I can’t really take it much harder, and we’re about to leave.  All sprinkled liberally with the F bomb. Good job, Toni. I have to rely on these folks to help us for the next two and a half years. Way to build a solid, sustainable relationship.

So, next week when we go to the clinic, I’ll be taking sweet Karina a small gift and telling her sorry. I’m so mad at myself.

On the upside, I’m looking forward to our next trip for two reasons. First, Phoebe is coming along with Tristan and me, and  she is really looking forward to it. Second, we plan to visit another little boy with leukemia in Mill Valley on the way down. I had written about this kiddo in an earlier email; he’s the one Tristan and I met in the clinic with his mom, who has a firefighter sister, who Tristan and I had met earlier in…you guessed it…Safeway at Ocean Beach. That little boy has a big sister just a bit older than Phoebe, so it should be a fun date. I’m eager to talk with the mother, as these guys are about a year further along in treatment than we are.

I’m taking with us to the city three big bags of toddler clothing and baby things and winter jackets to give to a couple I met at Family House last week. They are from Arkansas, in possession of few teeth and nothing else (having had their car t-boned by a truck just before their unexpected move to San Francisco), have a chubby curly-haired toddler girl with them and a premature baby in the hospital. The baby is two months old, weighs a whopping five pounds, and has just had his heart reconstructed by the only surgeon in the universe who can do this surgery. Someone at Family House just landed the dad a reasonably paying construction job, and Habitat for Humanity is, hopefully, going to build them a house in Concord. At the shared dinner table, the father told me how the surgeon called him personally to say he’d take on the baby’s case (after initially declining because the three-pound newborn was too big a risk), and how he (the dad) went above the doctors’ heads by going online to arrange free transportation for the baby to UCSF on Louisiana State University’s learjet. Huh? That was my response, too. Well, the guy’s clearly never had a lucky break in his life. It was about time. The mom flew with the baby, and he and the toddler took two flights and six buses to get to SF on their budget. By the time he had finished his story, I was feeling sufficiently guilty about the $9 bottle of Bogle back in my room. And about everything else, too. I will happily hand over to this brave guy as much good stuff as I can get together for them.

We will do Tristan’s blood work on Friday in Eureka and head south on Sunday.