Tristan and I are in the hospital, where he’s covering a white board with black squiggles while he finishes his New Years transfusion cocktail of 240mls O negative blood. While the red juice dripped into his body, he had a spectacular nap and the color returned to his cheeks. He woke happy, instead of rambling verbal aggressions at everyone, as he had been before the cocktail.

We came into the hospital this morning to have Tristan’s blood counts checked, something we’re doing every other day now. The clinic is closed today, so we had to be admitted to the Heme Onc floor for the day. We were hoping for a quick stop in, but Tristan’s hemoglobin levels had dropped low enough (to 7.2) to warrant a transfusion. At 58,000, his platelets are dropping quickly, but don’t yet need a re-up. His ANC is 340 — neutropenic. And what’s so weird about all this is that he’s exactly where he’s supposed to be. We would have to be worried for a WORSE reason if his counts weren’t dropping. That would mean the chemo wasn’t working.

When I last wrote, Tristan had just finished the first of two four-days-in-a-row chemo stints, and it was just before Christmas. On Wednesday the 23rd, Tristan was happy to leave the clinic de-accessed, meaning without tubes hanging from his chest. We returned to my brother Chris’ apartment and embarked on the tortuous final 24 hours before Christmas, while the kids climbed the walls and the grown-ups all stated, once again, their commitment to never again laying out the gifts prior to Christmas Eve. (When I was growing up, the gifts spontaneously appeared on Christmas Eve, thus reducing child insanity leading up to the holiday and increasing the magic of the night.)

While we rode out the kids’ angst, we had some great walks, once around a pond in Golden Gate Park, where we saw a giant herd of raccoons (it was weird, indeed), and another around a golf course in the park. My sister Nikki was with us from Massachusetts, and she played a critical role in corralling children.

Christmas Eve (when we celebrate Christmas) was a joy, the kids in heaven. Tomas was immersed in Legos, Tristan in a suit of armor and a glider bike, Phoebe in a colorful peacock costume. Family House had, in its infinite kindness and generosity, arranged for donors to buy gifts on a wish list provided by each of the families who stay there — didn’t matter that we weren’t spending the holiday there — so our family was Secret Santa-ed (or really NOT-SO-SECRET-Santa-ed) to an extreme. To put it succinctly, if I hear any one of my three kids even suggest that they felt cheated or let down by this strange Christmas away from home, chemo or no chemo, I’ll give him or her a giant nuggie. A very special Christmas was generously bestowed upon them, by my parents who came to be with us for a full two weeks, by my brother and his wife, who let us use their beautiful apartment, by my sister who flew across the country to be with us, and by the amazing Family House and its donors. 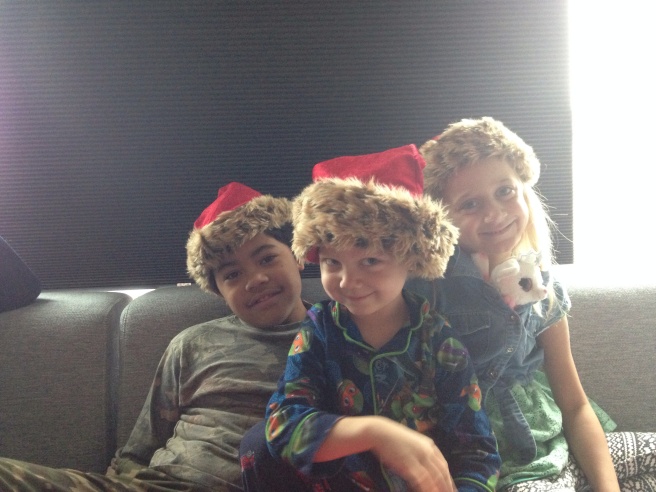 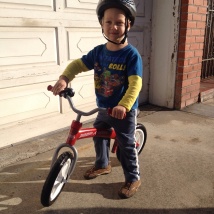 Gary left a couple of days after Christmas, and, on the Sunday after Christmas, Tristan started another four-day chemo stint. On each day, either Tomas or Phoebe went with us to the hospital or clinic in the morning. In the afternoons, Oma heroically stepped up to take Tomas and Phoebe out on the town, visiting both the aquarium and the Cal Academy of Sciences with them. Tristan’s energy declined over the week, and he became neutropenic, so we were doubly cautious and avoided public places entirely.

At one point when Tristan and Phoebe were fighting about something, I scolded them. Phoebe whined to me that Tristan had been hitting her. Tristan turned to his sister and said, “You know, Phoebe, it’s because my counts are dropping. That’s why I’m cranky.” So, there you have it: a new excuse. He’s already repeated it several times. Smartass.

We’re back at Family House now, after our day at the hospital. We moved back here on the second to last day of the old year, when my parents drove the kids back to Humboldt and the day before my brother and Agi got home from Christmas with her family in Hungary. Tristan is now, after his New Years cocktail, exuberant. He’s bouncing off the walls. He’s making jokes. He’s happy as a clam. I want a blood transfusion, too.

As seems to be emerging as a pattern for each stay at Family House, I’ve already had another profound experience here. Tonight, when I was cooking Tristan a late dinner after coming home from the hospital, we met Ivan, a 19 year-old Mexican-American kid who has ALL, the same form of leukemia that Tristan has, but at the wrong age. What a nice young guy, with his loving mama and papa there with him. It’s his first time out of the hospital since he was diagnosed in September, and it’s just a gift for the weekend. He was in his third semester of college, a major in kinesiology, when he was admitted to UCSF. The vinchristine, the same chemo that sometimes makes Tristan’s legs hurt in the middle of the night, has got Ivan using braces on his legs and walking with a walker. Again, if only we could all have the superhero powers of a three year-old. I’m very much hoping the best for Ivan. 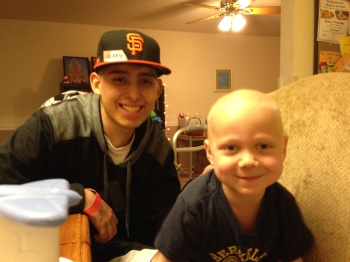 The story goes on. As I was chatting with Ivan and his heavily-accented parents, Rita, a tiny, bent-over, elderly Mennonite from South Dakota, the mother of a woman about my age who is waiting in the hospital for a liver transplant, came into the kitchen. I had met her last night, and so I introduced her to Ivan and his family. The old lady, in her Mennonite cap and frock, sat down to chat…and commenced to engage Ivan’s mama in a fluent conversation in Spanish, during which it emerged that she had lived for some time in Mexico with her husband not long after they were married. After Ivan and his parents went to bed, Tristan lured Rita into playing blocks on the family room floor, which she did willingly and at some length while she and I chatted about transplants and about her now-grown other daughter who was born thirty-five or so years ago with an incompletely-closed spinal column. What an absolutely amazing collection of people — fighters, soldiers, warriors — we meet at this place. I’m humbled by these incredible folks. 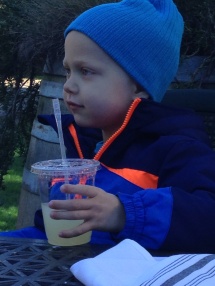 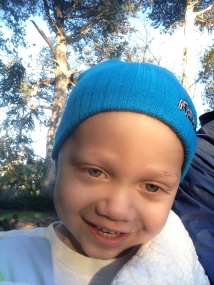