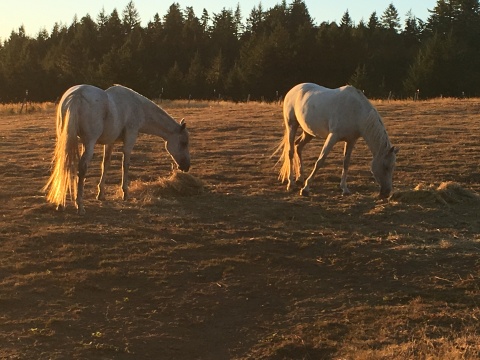 Tristan has a way with words. He’s unusually articulate. He can REALLY say what he wants to say. Express himself with JUST the right words to really capture his feelings of the moment, his inner animal. Unfortunately, he hasn’t yet learned the art of tempering his language to be appropriate for the particular audience present, or the setting he’s in. (I know some of you are pointing the finger at me. Acknowledged.) When he re-entered pre-school a couple of weeks ago, on our arrival the first morning, Tristan’s splinted arm got many ooohs and aaahs and lots of interest from kids and teachers. My son raised up the bound hand for all to see and announced, with passion, “It hurt like hell.” (“Hell” is a bad word these days, for those of you who raised kids when it was still ok.) Then, on a recent flight down to San Francisco, just after the kids and I had settled into our seats, all passengers were buckled up, and there was a lull in the commotion of the cabin, Tristan bellowed, “FIRE IN THE HOLE!!!”. By some miracle, the passengers around us simply chuckled and the stewardess didn’t hear (or pretended not to), so Tristan is not on his way to Guantanamo. 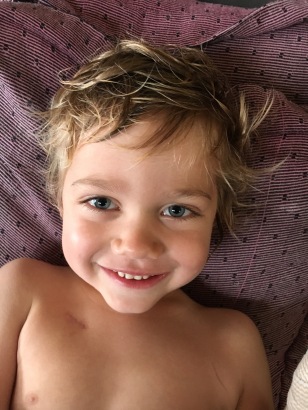 Despite his facility with language, the pronunciation of some letters does pose a challenge to the kid. When he started school again, he and an adorable boy with cherubic yellow curls quickly became best buddies. The boy’s name is Baxter, which Tristan very clearly and distinctly enunciates as “Bastard”. “Over here, Bastard!” he shouts across the school yard, summoning his friend to scratch for rolly pollies in the dirt. “Bastard! Bastard, I made you a sticker present!” Tristan says loudly as he hands over his daily gift to Baxter. In response, and out of concern that the mispronunciation will spread like the flu through the classroom, Tristan’s teachers have initiated regular school-wide exercises in saying words with “X”s. Good luck guys. I’ve tried, too. Tristan is adamant that it is “Bastard”. BAS-TARD, he tells me slowly and carefully, like I’m an idiot. 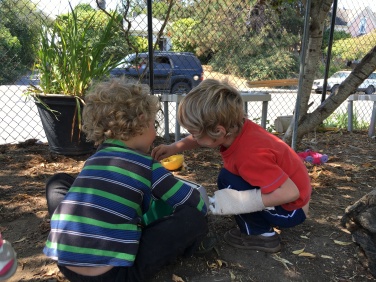 Tristan’s hand is healing well. After being released from the hospital, he took oral antibiotics for over a week. I anxiously felt his forehead for fever many times a day, but he thankfully came through with no infection. He proudly showed off his splint at our chemo visit to UCSF the week after the accident, and the wound awarded us a “Get Out of Steriods” card for September, as the steroids can slow healing.  An upside! We got to skip Tristan’s monthly five days of roid rage. Tristan wore the splint for three weeks, and then we graduated to “buddy taping” the injured finger to its neighbor. We quickly dispensed with the taping after I saw him hanging from a pole with his left hand. Appointments with the surgeon have shown the finger to be healing well, and another x-ray next week will tell more. The finger is no longer painful, and looks more or less normal at first glance. It won’t quite straighten yet and has a heckuva scar on the inside, opposite the middle finger, but, well, it works, thank goodness.

The finger smashing incident delayed Tristan’s return to pre-school by a couple of weeks, but, when he did go back, it was incredibly smooth, thanks in large part to the quick friendship with Bastard. In fact, Tristan is asking to go MORE days than just the two half-days for which he’s signed up. Hopefully he won’t be permanently suspended for profanity.

September had two big events for our family, the first one a happy surprise. A couple of weeks ago I got a phone call from our social worker at UCSF. “I hope you don’t have plans for Saturday,” she said. “You’re going to be in San Francisco!” UCSF had gotten us five tickets to the September 17th Giants game against the St Louis Cardinals, with an invitation to a pre-game meet and greet with Giants catcher Buster Posey and his wife Kristin, who are working to raise awareness about pediatric cancer. Tomas would be out of his mind with joy! Gary and I launched into high gear, arranging last minute travel, animal care for home, etc. Family House kindly agreed to let us stay there on Saturday night, as, although this wasn’t a trip for treatment, it was a UCSF-endorsed invitation for Tristan to represent pediatric cancer patients at the pre-game event. Gary ended up scheduling a Friday meeting in San Francisco, so we all went down on Friday to enjoy his hotel room, excessive cable TV-watching, and take-out Chinese food. 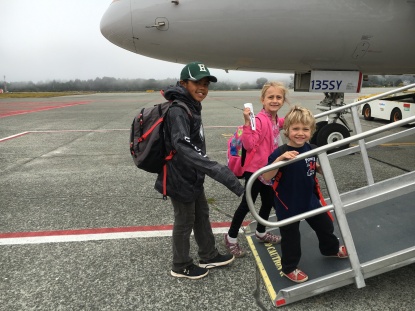 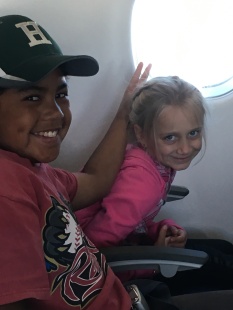 Late Saturday morning we moved over to Family House, where Gary, Tomas, and Phoebe had their first taste of the beautiful new building with its donated Pottery Barn decor. After eating leftover Chinese food for lunch, we clad the kids in orange t-shirts and Giants hats that Tomas had supplied for everyone from his well-stocked hat drawer at home. 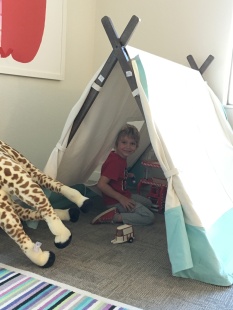 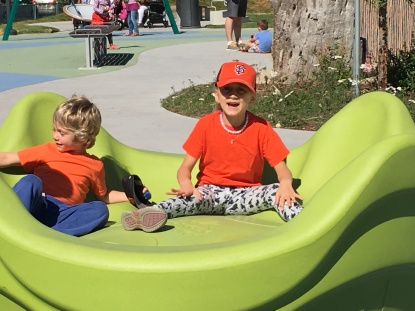 With a quick stop to play in a park, we walked over the AT&T park, just a few minutes from Family House by foot, where we joined a group of families of kids with cancer and were given tickets and entrance to the stadium. We hadn’t told Tomas that Posey would be there, and his face petrified into a grin when the player walked in with his wife and five year-old twins. Posey answered questions from the kids, and then he and his wife shook hands with the members of each family and took a photo with each. Our picture is hilarious: Tomas’ face is still frozen; Tristan has his finger on his nose; Phoebe is desperately peeping out from behind Tomas for her 15 milliseconds of fame; Gary is standing rigidly apart as he was, he later told me, worried that Posey might be pissed if Gary smushed in close to Posey’s wife; and I’m clutching Tristan in a vice-like grip to try to contain him. Clearly all of us are going to need training in public appearances if Tomas ends up playing pro ball or Phoebe becomes a bonafide princess. 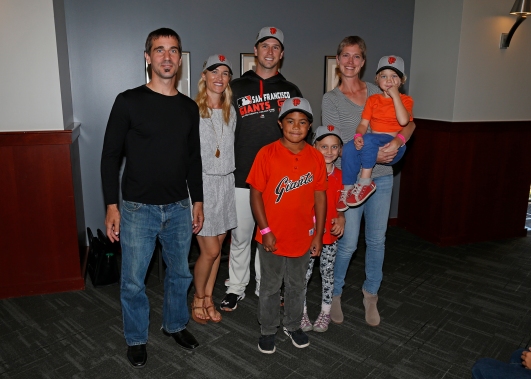 After the meet and greet, we were sent to find our seats, with instructions to put our things down and then meet at a certain place at a certain time for another pre-game event on the field. Initially we were told that this bit was for the cancer kid and one chaperone only, but the Giants lady handing out the special wristbands for field entry took one look at sweet Tomas and Phoebe and gave them bands as well. Tristan wanted Mommy to come, so Gary was left to guard the bags in our seats, happily chatting with the father of another cancer kid. The kids and I ended up with only 15 minutes to get from our nosebleed seats to the promenade level right behind home plate. We sprinted like football players through the crowds, dodging disgruntled fans. Only somewhat sweaty and discombobulated, we made it with time to spare, and were led down onto the field, where, in front of rows of cameras meant to capture the faces of pale, quiet kids battling cancer, Tristan released his inner monster. He jumped around. He was loud. He pummeled his sister. He embarrassed his brother. Somehow we made it through a photo shoot. Then we got to meet Lou Seal, the Giants mascot. And then the kids (with Tomas gripping Tristan’s wrist to keep him from destroying the field or running amok into the outfield), went out to the pitching mound while gymnast Aly Raisman threw the first pitch. Sometime during all of this, Noni (Gary’s mom) got to see Tristan on TV and Gary saw Tomas and Tristan on the big stadium screen. 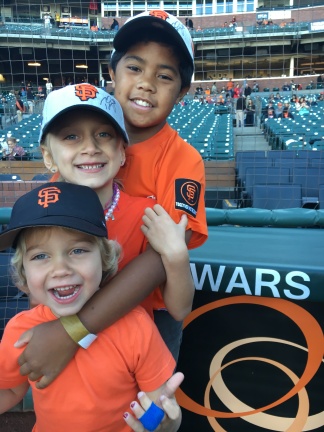 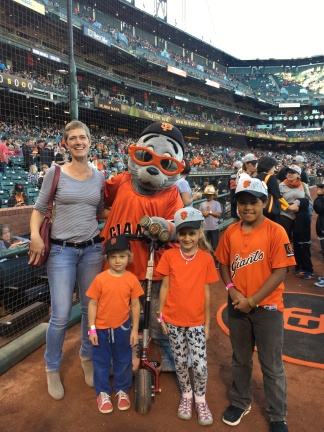 Finally it was time to leave the field. The cancer families were shepherded toward the exit behind home base. There, standing next to the exit and leaning on a bat, was the Cardinals first batter up, an extremely good looking man. He raised his hand to give Tomas a knuckle bump. Bump. He then put his fist up for Phoebe, who, as usual, was in la-la land and completely missed it! She dissed Matt Carpenter’s offer of a knuckle bump! I received the bump instead, and reassured the poor guy, whose self confidence was clearly shaken, that it wasn’t intentional. He might have hit a homerun if Phoebe hadn’t overlooked his knuckle bump.

Exhausted, we returned to our seats to consume nachos, chicken strips, hot dogs, hot pretzels, hot chocolate, and beer. After being talked into getting a bag of cotton candy, I failed to monitor its consumption. Suddenly Tristan was even more bonkers, and Phoebe was completely off the wall. She started about forty “Let’s Go Giants” chants, until the energy of her fellow ball fans began to wane and they shot me wistful looks, longing for just the regular ball park noise. The Giants, who had led the whole game, fell apart in the last inning and lost, but nobody cared. The streets were crowded with happy fans the whole way back to Family House, where we all five of us slept like the dead.

The second big event of the month was Tristan’s fourth birthday, which took place this past Saturday. In planning the party, it quickly turned into an event meant to thank all of those who’ve helped us since Tristan’s diagnosis — those who’ve fed us, watched Tristan and Phoebe, cared for our animals when we’ve been gone, and done things to make life better one way or another. The weather was gorgeous and we put the spread of food under the walnut trees in the yard. Somewhere between fifty and sixty people came. The kids played loudly and happily outside. They got out every ball and scooter and toy truck, they played on the slide and swings, and they zipped on the zip line. The grown ups ate and drank. And, best of all, the Kneeland Volunteer Fire Dept rolled up with two fire engines and let the kids (and adults!) shoot the hoses until the tanks ran dry. The firemen stayed for cake (which happened to be decorated with a hook-and-ladder), then drove the trucks away with some toots and whistles of the sirens. Tristan was in heaven, and I was so happy to be surrounded by our wonderful friends. The day ended around the campfire with a few remaining, hearty Kneelanders who kindly stayed to set off fireworks and help kill the keg of beer. Many, many thanks to all of you who came to celebrate Tristan’s fourth birthday with us! It meant a lot to me to have you all there. 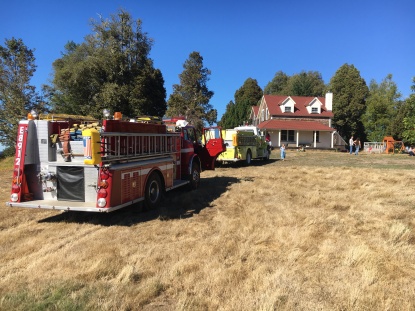 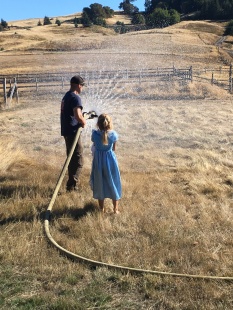 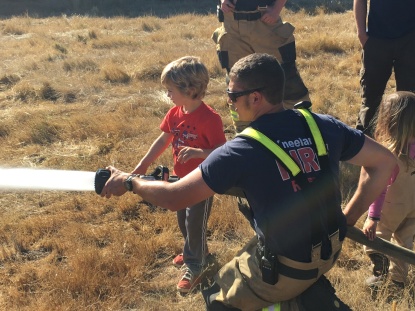 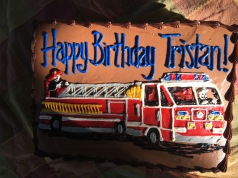 2 thoughts on “A way with words”